Introduction to Case Study: Story behind the Mercury Poisoning in Minamata

Lets go back in time to understand what had happened

It started in mid 1950s, in Minamata, Japan, when people began to notice strange occurrences in cats. The cats were making strange movements, and falling into the sea. People thought they were committing suicide. In the town itself, the people started noticing unsettling symptoms such as shaking, nervousness and seemed to be going insane as they shouted uncontrollably.

Around 1952, the production of acetaldehyde boomed and so did the local economy. About the same time, fish began to float in Minamata Bay. Chisso, as it had since 1925, continued to pay indemnity to local fishermen for possible damage to their fishing waters.

In 1956, researchers teamed the disease Minamata disease and they continued studies to find out what caused it. They knew that it affected the nervous system and that the people had a common diet of fish. From the clue that the fish were being poisoned, the reseachers finally determined that the disease was caused by consuming heavy metal poisoned fish and shell fish.

By the end of 1956, that was when there was evidence gathered by Kumamoto University researchers that found that organic mercury was the cause of Minamata disease and that the Chisso plant was responsible for dumping the plant's acetaldehye waste water. This caused the symptoms. 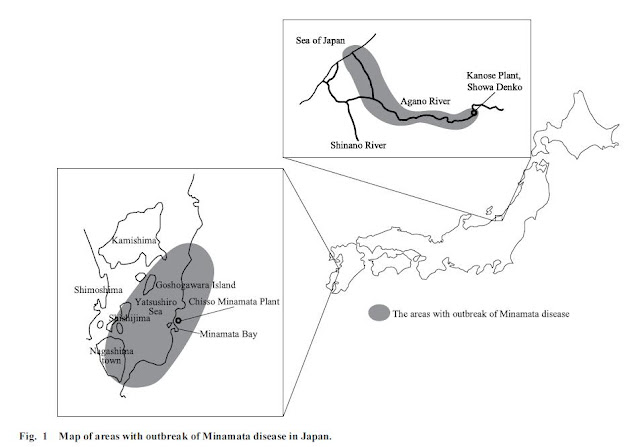 The Chisso plant continued to refute the information and any link of its mercury waste to the illness. It was later discovered that Chisso Corporation had dumped an estimated 27 tons of mercury compounds into Minamata Bay.

As the mercury dumping continued, babies were born to poisoned mothers. The children were born with severe deformities, including gnarled limbs, mental retardation, deafness, and blindness.
Posted by Timothy || Sili at 11:17

Email ThisBlogThis!Share to TwitterShare to FacebookShare to Pinterest
Labels: Introduction

Timothy || Sili
Hello everyone! We are Biomedical Science students from Ngee Ann Polytechnic. This blog was created as part of our project for the Instrumental and Analytical Chemistry module. Hope you enjoy your visit on this blog! :)))